World-class award winning multi-instrumentalist, singer, arranger and composer Phil Beer (d.o.b.12th. May 1953) is a founder member of the internationally acclaimed folk/acoustic roots pioneers Show of Hands. His own Phil Beer Band is much in demand as are Beer’s solo performances. A sought after musical collaborator, session player, recording engineer and producer, Beer is also the boss of his own record label, Chudleigh Roots.

Beer’s performing career kicked off when he was 16, on the late ‘60s/ early ‘70s thriving Devon folk scene:

“We could go to something every night of the week within a thirty mile radius. There was a particular club in Exmouth, The Jolly Porter, and we met all of these people coming through on their way to Cornwall, Ralph McTell, Gerry Lockran, Wiz Jones, Tony Rose, Nic Jones…It was very inclusive and the organisers would say ‘do a couple of songs and we’ll buy you a pint’. We are lucky that particular era afforded us this unique platform to get up and make fools of ourselves. And there were so many clubs to do it in.”

Beer was born into a musical household. His dad played the fiddle in local dance bands, inspired by Victor Sylvester, the Kingston Trio and the Christy Minstrels. His mum played piano and at home his parents would play reels and dances arranged for violin and piano from a 1910 Scottish songbook. Mrs. Beer also played the organ for the local Exminster Methodist congregation for most of her life.

Music was integral to chapel. ‘We’d sing all sorts of gospel music from a book called “Faith Hope and Clarity,” says Beer. “There were songs by Leon Rosselson, a card carrying communist and absolutely an atheist, but Palaces Of Gold is in that anthology. And Sydney Carter, Crow On The Cradle is a song we’d do. I think it’s his greatest song.”

Music wasn’t the only legacy that chapel provided, giving Beer a humanitarian grounding, it also suggested the witty title of his 2005 solo album Rhythm Methodist….(Hands on Music 2005/ Talking Elephant 2008).

Childhood holidays in Falmouth ignited Beers abiding love of the sea and of the Tall Ships that would anchor in the Cornish town’s famous deep- water harbour. Later he’d compose the brilliant ‘Cornish’ instrumental songs inspired by those holidays, including the Falmouth Packet that featured on his 1999 collaboration The Fiddle Collection. (Hands on Music). This song was also re-recorded for the Show of Hands album Witness (Hands on Music 2006).

Given a ukulele by a neighbour, Beer was playing it by the age of six. He then took up the violin (thanks to his father buying him a good instrument that he still treasures). And when his dad also brought a mandolin home, Beer learnt that too. On hearing Davy Graham’s Folk, Blues & Beyond aged 14, he learnt to play the guitar. “That’s what focused me. I wanted a piece of that. It’s an astounding album: a yardstick for acoustic based folk and blues music. Still is.”

Before he was fifteen, Beer had also heard Fairport Convention’s Full House. “Full House was after Sandy left. People will say ‘How can you prefer that to Liege And Lief!’ But it was the extraordinary and swaggering sound of the electric fiddle in the foreground of the music. Dave Swarbrick had absolutely put his stamp on the opening bars of Sir Patrick Spens, that when I first heard it was somehow familiar to me. (It was one of the songs he’d heard played from the 1910 songbook in his infancy).”

A year later Beer was playing covers of Fairport songs in a duo ‘Odd Folk’ with his friend Colin Wilson. And it was on the Devon folk scene that the duo met fellow teenage underage drinkers Steve Knightley, Paul Downes and John Bat Evans, strutting their stuff in a band called Gawain.

Beer had met Wilson in Teignmouth, where Beer having passed his 11 + attended the Grammar school, making a much loved daily 11 mile journey down to the coastal town. But he sacrificed academic ambition to his passion for music and left school at 16. He supported himself working as a computer tech at Exeter University until touring as a musician took over.

When Knightley left to study in Coventry, Beer formed a duo with Paul Downes. As ‘Paul Downes and Phil Beer’ and then the more snappily titled ‘Downes and Beer’, they toured extensively (relocating to Cheltenham to make the travelling easier) and released four albums. These mostly feature folk standards and their own compositions as Beer with his keen ear for melody was honing his own skills as a composer. Life Ain’t Worth Living (the old fashioned way) (Sweet Folk and Country 1974), was followed by Dance Without Music (Sweet Folk and Country 1976) and then Live in Concept (Rola Records 1980), a live recording featuring guest musicians including Mike Oldfield and Steve Knightley. Live at Nettlebed (Talking Elephant 2008) is the release of a recording of their 2007 reunion show.

Beer loved and still loves gigging, but hates the grind of getting there. He says: “Periodically, I just get sick of being on the road and touring.” Mid 1978 was one of those times. So after a chance meeting with Mike Oldfield’s studio engineer Paul Lindsay, Beer began working with him in Oldfield’s home studio in Througham Slad, Gloucestershire. Beer worked too on his own first solo album, Mandoline (Greenwhich Village Records) released in 1979.

The work with Paul Lindsay, however, led to more touring - still a grind, though this time in First Class. Oldfield hired Beer as a guitarist on his Incantations tour taking in arenas and stadiums in London and across Europe, resulting in the live album Exposed. (Virgin 1979). Maddy Prior whom Beer met on the tour, remains a good friend.

Paul Downes remained a good friend too and when Beer realised that big monster productions weren’t really his bag, in 1980 he and Downes formed the Arizona Smoke Revue, an English folk/American bluegrass group with Bill Zorn (ex Christy Minstrels and Kingston Trio) on banjo and Zorn’s brother Pete on saxophone. Between 1980 and 1983 the band released three albums “Bill Zorn and the Arizona Smoke Revue” (Avada 1980),Thundering on The Horizon (Rola 1981) and New Album (Rola 1983). Beer and Downes continue to occasionally tour as a duo.

By 1984 Ashley Hutchings had got wind of Beer’s multi-instrumental virtuosity and all round glowing reputation and asked him to join his legendary “Albion Band.” Beer somehow balanced this with the Arizona Smoke Revue and various sessions including for the Rolling Stones Steel Wheels (Rolling Stones Records 1989).

It was at the Wimbourne Festival in 1986 that Beer saw his old friend Knightley perform in ‘Show of Hands’. Particularly moved by Knightley’s song Exile, Beer suggested that they get together and give Knightley’s growing back catalogue an outing on the folk circuit. They duly became the duo Show of Hands and hit the road.

Putting his recording expertise to good use, Beer travelled from his home in Maisemore, Gloucestershire to Knightley’s Beaminster home studio above the garage at Catsley House where the duo recorded their live set. Show of Hands (1987) was released on cassette only as was Tall Ships, which followed in 1990.

As Show of Hands’ gigging schedule became incessant Beer left ‘The Albion Band’ in late December 1990, after recording his ninth album 1990 (Topic 1990) with the group. However Beer continued to work on his solo career and to collaborate with other musicians, including Steve Harley on the self-styled Cockney rebel’s album Poetic Justice (Castle 1996) and with Phil Beer Band member, Deb Sandland. They self-released Beer and Sandland Live in 2003.

After creating the all-star Fiddle Collection, and recording their eponymous album in 1998/99 (Hands on Music 1999), Beer joined the celebrated Feast Of Fiddles line up.

His collaboration with Knightley and three Chilean musicians in the 1992 touring and recording project Alianza had a big impact on Beer: he introduced the cuatro into his repertoire and was inspired by the rhythmic and percussive elements of Latin music.

Beer released his solo album of original tracks Hard Hats (HTD 1994) to critical acclaim and another The Works in 1996 also on HTD. Both were released as Hard Work a double album in 2009 on the Talking Elephant label.

In 2000, Beer put together the Phil Beer Band. This continues to tour and record with an evolving line-up of stellar musicians, that in 2003 saw the inclusion of Miranda Sykes on guitar. At Beer’s suggestion, Sykes would become the ‘third member’ of Show of Hands.

Phil Beer Band Releases include :Mandorock (recorded and produced by Beer and self-released in 2000), Once in a Blue Moon (self-released 2001) featured the track Falmouth Packet/Tipsy Sailor and Mandorock Live recorded on the tour in 2000 was released in 2009. (Talking Elephant).

Beer released a first major retrospective of his work in 2010, Box Set 1 (Chudleigh Roots) that shows the depth, range and diversity of his musical inspiration.

With Knightley and Show of Hands’ then manager Gerard O’Farrell, Beer created a business model that turned the usual business of music on it’s head and they formed the label ‘Hands on Music’ in 1996. Bypassing the middlemen and building an enduring, close relationship with their audience, Beer with Knightley and Sykes, has built up a phenomenal grass roots following.

Beer is an extraordinarily intuitive musician who really listens to his fellow performers. His playing lifts and inspires those around him. Beer is known for having no ego about playing, and will not ‘hog the solos’. Famously easy-going, “except about performing standards”, he’s also highly regarded for happily trying anything out.

Beer dedicates himself to an exemplary professional approach in all his work, and to gigging with the highest production values wherever, whatever the venue. Remaining adamant that you’re only as good as your last performance, he believes that the audience should always come away feeling they’ve witnessed a quality show “on the level of say, Clapton at the Albert Hall.”

Bringing the same attention to detail to his recording and production work, Beer put together the Show of Hands recording studio at Riverside Studio which he ran until 2011 as well as his own studio at The Green Room in Devon where he continues to work on his own projects. These include editing and compiling a retrospective from his massive back catalogue for subsequent ‘box set’ releases, and on commissions for compositions for film and TV. He set up his own Chudleigh Roots label in 2007.

Beer also runs song-writing workshops both with Knightley and without, notably on his Folk Boat, charters that brilliantly combine his love of sailing with his love of music and sharing his extraordinary knowhow.

Whilst generally averse to sports, Beer was part of the winning crew of The Pegasus, in the Tall Ships Race, 2009. Despite having to stop for repairs in St. Petersburg, she was first in her class, and second overall after the nine-week race that covered over 4,500 nautical miles and took in twelve countries.

Both solo and with Knightley Beer raises money for charities, whether local such as saving a rural post-office or those that address global issues, including autism, educational projects and assisting refugees. With Knightley, Beer is patron of Sidmouth Folk Festival, the St. Ives Festival, The Village Pump Festival, and Exeter’s Royal Albert Memorial Museum & Art Gallery.

After several BBC Radio 2 folk award nominations, including Musician of the Year’ Beer won Best Duo in 2010 with Knightley for Show of Hands, also picking up Best Original Song for Arrogance, Ignorance and Greed. That same year Beer responded to what he describes as ‘minor heart surgery’ with typical humour, saying: “News of my demise has been greatly exaggerated.”

He received an Honorary Doctorate for services to music from Plymouth University in 2015, along with Knightley and Sykes. In 2017 he won the title ’Best Musician’ in the 2017 Folking Awards, voted for by the public and Best Duo for Show of Hands. Again with Knightley, Beer was voted Greatest Ever Devonian in 2006, beating amongst others, Agatha Christie, Sir Francis Drake, Captain Scott and Chris Martin to the title. 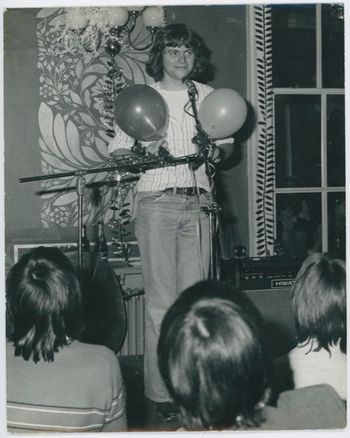 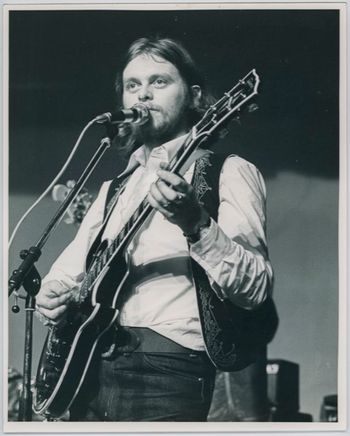 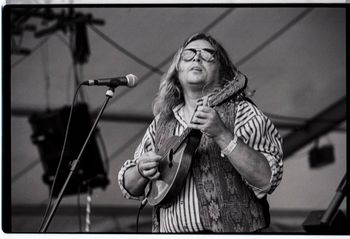 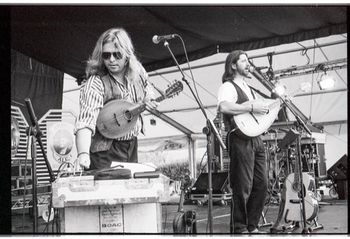